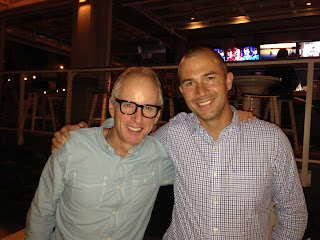 It has been a great couple of weeks.  The weather wants to cool off and the mornings are full of the potential of fall.  Three thoughts on this very rainy Tuesday morning, as has become customary.

1.  Pensacola had the very good fortune of welcoming bestselling author, Ian Cron, for a workshop and book signing last week. Cron met with a group on Thursday and presented on the Enneagram, a personality typing system which may go as far back as the mystic Evagrius Ponticus.  It is a remarkable tool, and Cron did a masterful job of interweaving story and personal history throughout the presentation.  Thanks to Quint Studer, Scott Remington, and Eric Stevenson, for their efforts in getting Cron to Pensacola.

2.  In conversation, Cron made mention of the work of the late Irish poet, John O'Donahue.  I'd listened to a wonderful interview of O'Donahue several months ago, and was moved by his comments on the aesthetic.  He masterfully described beauty as a fundamental part of the interior life.  I am slowly making my way through his work, Anam Cara, and it resonates deeply. 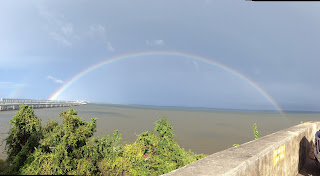 3.  As I was making my way back from Santa Rosa county yesterday, I was captivated by a rainbow.  It was the most vivid and complete example I'd ever seen.  It took me back to Parris Island, when at the age of seventeen, I was in the midst of a troop movement with my hosts from the Marine Corps.  It is not the most spiritual of places.  There is an overwhelming amount of gray and military green - but I recall looking up to see a lovely rainbow in the distance.  There was an overwhelming and accompanying sense that everything was going to be just fine.  I am increasingly mindful that the aesthetic, whether it be natural or man made - grabs us by the shoulders and shakes us into the present.  And that is a good thing.