It is a sunny Sunday here in Florida.  Tax preparation awaits me.  Which is less than inspiring.  Thus, three thoughts, as has become customary. 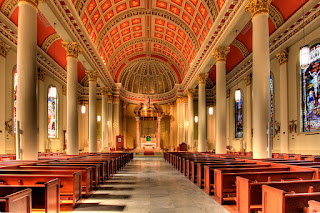 1.  I found myself in Mobile yesterday morning for a meeting, and then made my way to the Cathedral Basilica of the Immaculate Conception.  It is a curious thing how certain spaces in time burn themselves into our consciousness. I can vividly remember an afternoon visit there when I was an undergraduate.  I was interning downtown and stopped in the church to pray after lunch.  I don't particularly remember a great deal from that span of time otherwise, but I do remember sitting in that cathedral.  Slowing down time somehow opens it up.


2. I made my way over to Fairhope and 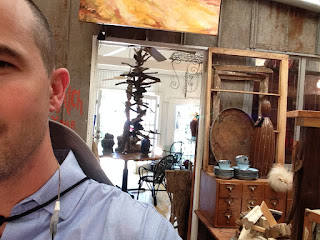 wandered around and stopped in on a writer's workshop.  Picked up a collection of essays by Marina Keegan and set up under a tree next to the bay and read until my attention was drawn to a dolphin jumping out of the water.  Moments later, I heard someone on the pier yell, "shark"!  Got me thinking about how often we misidentify the beautiful things in our lives.  I considered taking off my loafers and swimming out into the bay.  Now that I think of it, why didn't I?

3.  I'll leave you with a poem that dropped out of the ether a couple of weeks ago as I returned from a trip to Pennsylvania, where I toured Gettysburg with friends.

afoot a great accidental battlefield
pocked by it all

where much suffering
soaked the orchard, field, and air

the blind eagerness
of the youth of all times, naive, fever

and the souvenir laden lass
in tow behind mother

the guide
hopelessly numb to the whole thing

a spectacle
of the hallowed

where was the spirit, she
in the evil struggle?

hell on earth
right here on this very dirt

if the kingdom is at hand
dark flames first occupied

the very lungs
of beast and man

grand time as the only redemption
covering our foolishness

Your comments and feedback are welcomed.