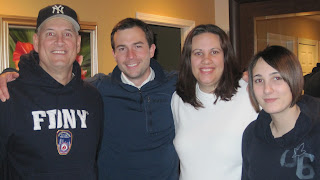 I recently had the pleasure of traveling to Sacramento to see my Dad retire after an impressive (28) year career in the United States Air Force.  Ever the planner, even before retirement he was well on his way to determining the next steps in what I suspect will be a second full career.  I have many fond memories of growing up as the son of an Air Force officer. And I have assumed some of the habits that I picked up watching him.

Like the many flight suits and boots which I saw neatly set out before his early rise.  I often times have my own "suit" prepared and set out in military order for the next day.  Perhaps not quite as consistently as he did, but certainly on those occasions when I know I have to get up earlier than is even remotely natural. 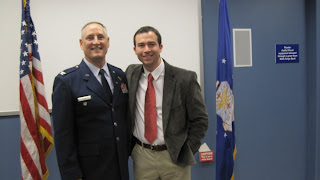 The written ceremony program set out the details of an impressive career, including in residence attendance at the Air Command Staff College and Air War College, as well as two command positions.  It was heart warming to hear his peers commend his fortitude and resourcefulness.  It was an opportunity for me to reflect on my appreciation for the stability and example that was set out for me by my Dad.  It was an opportunity to think about the differences between journeys and destinations in life. 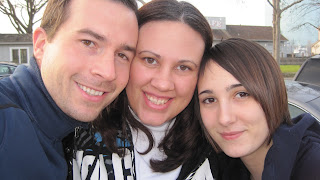 During a lecture, I once heard Ethan Fishman describe the completion of undertakings as being anti-climactic.  This has stuck with me for a long time. Graduation is only a ceremonial recognition of all of the blood and sweat that goes into getting a diploma.  Celebrating a (50) year wedding anniversary, as did my good friends Robert and Monika Brown - is not so much about the milestone as it is acknowledging the sacrifices that go into making a marriage last half a century.  Retirement is perhaps more about celebrating the dedication that goes into making solid careers.  Sometimes when we are mired in the grind of meaningful undertakings - it can be a challenge to enjoy the beauty of the struggle.  We sometimes miss out on a good vantage of our own growth.

The trip was also an opportunity to make some humorous observations, including seeing an elderly woman sitting nearby me on an airplane, using an electronic reader while I read from a paper book.  I had to smile.  The old embracing the new and the young embracing the old.  Maybe there is hope for humanity after all.  I also had the opportunity to return to Old Sacramento, which was the site of my most memorable elementary school field trip.  As with many childhood memories, Old Sacramento was engaging, though not on the scale that I recalled.  I have experienced this sensation a number of times upon the return to an old haunt, seeing an old photograph, or running into an acquaintance from the past.  Perhaps only with time, maturity, and distance are we capable of seeing things for what they really are.

It was a good trip.  Traveling is always fun, but coming home is the highlight.
Email Post
Labels: Dad Sacramento travel