Little Rascals, friends, and a discussion between heart and mind 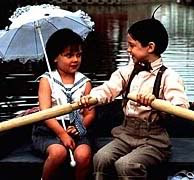 I remember quite well the characters in the 1994 remake of The Little Rascals, shaking their heads as Alfalfa (who I had sympathy for, partly because I share some of his goofy physical features) displayed his love for Darla. But they never foreclosed him. This is perhaps the beauty of a good friendship. Honest (even in error), but patient.

But I have puzzled with dealing with friendships where I either become concerned that distance reflects an affront to me, or where it becomes apparent that interaction is not healthy for whatever reason.

Jefferson made these observations in a dialogue between his "head" and his "heart," in a 1786 letter to Mrs. Cosway:

I shall never envy nor control your sublime delights (heart speaking to the head here). But leave me to decide, when and where friendships are to be contracted ... You say, I contract them at random. So you said the woman at Philadelphia was a drunkard (in this dialogue, he wrestled with whether he should exercise kindness and give to a drunk woman - his head ultimately reasoning and prevailing in that she would drink the money away). I receive none into my esteem, till I know they are worthy of it. Wealth, title, office, are no recommendations to my friendship. On the contrary, great good qualities are requisite to make amends for their having wealth, title, and office.

Jefferson was speaking of the tension between higher thinking (even if subconscious) to select friends and selection at "random." There is something to be said for choosing to intentionally interact with those who enrich our lives. But I also agree with his heart that random selection, being little more than intuition, is also appropriate in many cases.

At first, I read his comments on "contracting" as "contraction," or allowing a friendship to go through seasons, as opposed to the formation of a friendship "contract," a concept not common today, but still used to describe marriage. Contraction as the friendship blossoms at some points in time but exists dormant in others. Meaning not the death of the friendship in its winter, but cyclical vacillation being natural. Read this way, Jefferson's observations are both comforting and doubly pointed.

I am grateful this morning for my many good friends. Many of whom take the time to tolerate my random ruminations and bring color to my existence. If I have not told you lately - thank you.
Email Post
Labels: Friends Jefferson thought