serenity and the Florida Highway Patrol

It was a remarkable weekend at Manresa in Convent, Louisiana.  I made the drive over after taking care of a few things on Thursday morning.  I enjoy seeing the cane fields, oaks, and moss.  I was placed in the same room I had last year which was nice.

The retreat was given by Father Jack Callahan, who did a masterful job - especially walking the retreatants through an imaginative prayer session on the crucifixion.  It was compelling enough that I inadvertently left a mark while grasping my face as Callahan took us through the story.  Ignatius and Callahan also remarkably captured and described a very present wrestling match between the spirits at a timely point in the retreat (for me, within hours of the feelings arising). 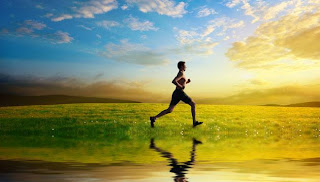 Inspired by Fr.'s encouragement to utilize imagination, I ran with Thomas Merton and Jesus Christ on Saturday morning.  We did a balmy (8) miles along the banks of the Mississippi.  My first impression (as noted in my journal that day) was that neither of them talked much, which was surprising (and more importantly, disappointing).  I am assuming that perhaps they were both struggling, as was I, to get in lung fulls of wet Louisiana air.

One of the graces I took was to see the beauty of the Mass.  Last year, it had left me feeling uncomfortable - as if, as Merton once observed, I had seen something that needed to be done.  There seemed a showy pageantry that bristled against my Baptist roots.  This year was different.  The Mass was one of my favorite parts of the day.

Perhaps the greatest unexpected grace was that while I was there, I picked up Ronald Rolheiser's phenomenal book, Against an Infinite Horizon.  It has moved me unlike anything I've read recently.  I experienced similar soulish familiarity when I read some of Eric Butterworth's work as an undergraduate.  Butterworth accurately captured the essence of the "spark of the divine" within man but then dropped the ball.  He stops short of recognizing the true Divinity of Christ and rambles off into the briars of some kind of self actualized divinity that is in the end, supposedly no different than Christ's.  But I did connect with the idea of the "d"ivine being within - a gift of the "D"ivine.  And that because of this connection to Him at our cellular level, there are many longings (including those of sexual and social natures) which are misunderstood nearly universally.  Rolheiser commences his book with the recitation of a profound poetic observation by Karl Rahner (emphasis added):

In the torment of the insufficiency of everything attainable we come to understand that here, in this life, all symphonies remain unfinished.

Indeed.  He then launches into a compelling examination of sexuality, purity, blessing (and other topics) which I'll leave him to give you.  Was back on Sunday evening and then on a plane at 5:30 Monday morning for a mid-day deposition in Tampa.  Then, my flight was cancelled and all of my inspired feelings of serenity were tested.  He was undoubtedly saying, "Let's see how you handle this, buddy."  Five hours and one ticket later (Florida Highway Patrol), I curled up next to my wife.  It was good to be home.  There is, clearly, still much work to be done!