of ants and men

There is so much that I cannot begin to fathom.

This week has been rich in opportunities to stretch my understanding of existence and my relationship with being.  This unexpected diversion began with Lectionary lunch on Wednesday, where a mind blowing conversation on the nature of heaven and its relationship with flesh was had.  I felt very much like a child as I could not help but ask myself on a wide range of questions - what do I believe and more importantly, why?

Jessica and several girlfriends attended a women's conference Friday evening and Saturday at the Pensacola Civic Center.  Our good friend Kate generously offered up a place at the beach while I stayed with a brave troop of four youngsters.  We all survived, though I don't know that any of the kids actually changed their underwear or brushed their teeth.  What can I say.  That's how dads roll.

Out at the pool on Friday afternoon, I watched a group of middle aged women venture out to a floating obstacle course behind the resort (appearing to have perhaps taken in a few drinks, but not obliterated).  Immediately, I felt judgmental.  What a juvenile scene.  Grownups acting like children.  They ought to be behaving more responsibly.  And yet, what does that mean?

One of the resort employees walked by and I made a passing comment about the entertainment in watching the women attempting to maneuver the obstacle course.  Their laughter seemed to keep them from concentrating too intently.  I would have taken that obstacle course much more seriously.  She mentioned that one of their twenty-something daughters had passed a few months ago and that the ladies had brought their friend out in something of an emergence from mourning and celebration of life.

I was floored.  What is it that gives me the illusion that I have a right to judge anyone? 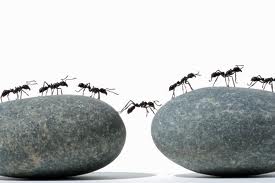 Ego deflated, I laid back down on my chair and stared at the ground until some ants caught my attention.  They scurried in a long trail, moving in two directions.  The speed with which they made their way about was remarkable.  My mind was drawn to their interconnectedness.  The need for us - our energy - to be in contact.  We need each other.  Just like that woman needed her friends to pull her out of the depths of what I can only imagine to be hell.

After we ate pizza, watched the sun go down and got the kids to bed, my good friend David and I took in the documentary I Am - which asks two powerful questions: 1. what is wrong with the world?  2. what can we do about it?  The film presents an incredible exposition of some remarkable voices on the question of human nature, materialism, love - and an ever so light touch of quantum physics.  We were shortly thereafter joined by Clifford, who wisely elected to stop torturing himself with some silly paper which will assuredly seem inconsequential before long, and rounded out the night with some interesting conversation. The following morning, after Clifford and I got in an early run - we all marveled at the gift of sunrise, made breakfast, went to two car shows and the Naval Air Museum, and ate a McDonald's lunch before noon.  It has been a week filled with life.

I am ever impressed with God's preparation of us for all things.  Epiphanies, conversations, relationship, being, and love.  As Gracian said, everything is at the height of its perfection.
Email Post