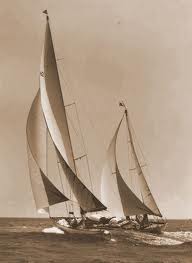 It was a glorious weekend.  Got to join a friend out on a Saturday sail on Pensacola Bay.  Great wind, sun, and my wife sitting on the stern looking like Jackie Kennedy Onassis, all made for a great day.  Not to mention the best guacamole I have eaten and sandwich the Captain had waiting when we got back to the slip (having arrived there under sail no less, as the boat's diesel was temperamental).  The look on two boys faces as we closed rapidly on their dock before tacking at the last minute down Bayou Chico, was also quite memorable.

The week got off to a busy start with my renter announcing that she was moving out unexpectedly.  I signed a contract on the rental (lest you think I am some savvy investor, it is my first house) about two weeks before Hurricane Ivan slammed into the Gulf Coast in 2004.  It has been a love hate relationship since.  I had romantic notions of renovating the 1933 cottage and all the fun that would be.  It was fun and affordable.  For about five minutes.

But that little house was great in many ways.  It was there when we needed to return to it.  It rebuffed more than one hurricane and I have left more than a little bit of my blood and sweat in the attic.  One of my many funny memories is watching my wife from the attic as she mixed insulation in a hopper with a golf club.  With my skills on the course, that is probably the best use that golf club was ever put to.

Present day - we have decided to take a stab at selling it.  And while my rational and business oriented right brain is chomping at the possibility of letting go of the vampire that is landlord-hood, my left brain clings desperately to the warm memories of the "little yellow house," as my son calls it.

In some respects I think I have always had wierd attachments to objects.  When we traded my old Honda in a few years back, I literally had to sit in it and say goodbye before I handed over the keys.  But I have been thinking tonight that this is nonsensical.  It isn't the objects. It is the memories and the feelings that these objects are associated with.  Those are the things which we cling to but don't always understand. So we cling to the objects.

The good news is that I will get, God willing, one last taste of renovations as I paint and scrape in the coming weeks in hopes of wooing someone else who likes old cottages and the romantic notion of renovations.
Email Post
Labels: renovations sailing