It has been a wonderful Christmas.  My three year old announced today that "the rules are that you stay in your pajamas on Christmas."  How right I think she is.   It has been a gift to slow down and not worry about schedules and tasking. 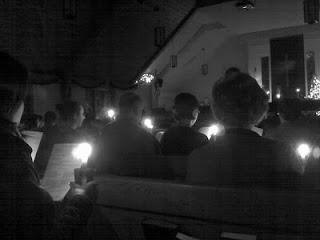 Last night, after everyone was sleeping - I slipped off to catch the 11:00 service at our church.  It is the first time that I have ever attended a midnight service, though I have wanted to do so for many years.  Although I found myself near slumber a few times during the sermon (through not fault of the speaker), I also found myself with eyes closed but fully present. I experienced the sensation of "falling awake" for brief moments.

One of the gifts my wife gave me is Thomas Merton's classic, The Seven Storey Mountain.  I began reading a bit of it today.  His voice is familiar.  I found the following compelling (writing of his childhood religious exposure, which was quite limited and perfunctory):

One came out the church with a kind of comfortable and satisfied feeling that something had been done that needed to be done, and that was all I knew about it.  And now, as I consider if after many years, I see that it was very good that I should have got at least that much out of religion in my childhood.  It is a law of man's nature, written into his very essence, and just as much a part of him as the desire to build houses and cultivate the land and marry and have children and read books and sing songs, that he should want to stand together with other men in order to acknowledge their common dependence on God, their Father and Creator.  If fact, this desire is much more fundamental than any purely physical necessity.

I think Merton is right.  I believe there are two primary drives which are at the root of humanity. The first is the desire to commune with the divine.  The second is to understand and connect with one's fellow man.  I know the feeling of leaving a spiritual house and feeling as though something dutiful had been accomplished.  But I am trying to get to a place where I walk into the spiritual house feeling at peace and not like a refugee.  To this end, I am embracing the obvious reality that spiritual awakening must be accompanied by rigorous practice.

I am so thankful for the gift of another year.  I am grateful that God saw fit to redeem me.
Email Post
Labels: Christmas Merton