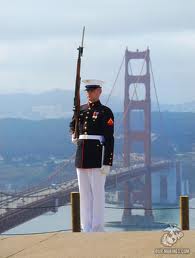 On Veterans Day, remember the Marines: Fabled corps has served nation for 235 years

As we celebrate the 235th birthday of the  Marine Corps today, on the eve of Veterans Day, it is fascinating to explore why the smallest branch of the armed forces holds such a big place in American society.

To start, Marines historically have taken disproportionate casualties, a trend that has continued during the global war on terror. The Marine Corps makes up less than 11% of the U.S. military, but more than 23% of the Americans killed in action in Iraq and Afghanistan are Marines.

The corps' history of battlefield success against long odds is also a primary reason why the sight of a Marine in dress blues or a bagpiper belting out the Marine Corps hymn has an immediate, positive impact on a huge chunk of the American population.

Marines protected Washington from three major British assaults during the War of 1812 and stopped the German advance at the battle of Belleau Wood in World War I. Iwo Jima, Guadalcanal and Okinawa were bloodbaths, but the Marine Corps accomplished the mission and revolutionized amphibious warfare.

Even in less popular conflicts, the corps added to its reputation. Outnumbered 8 to 1, the Marines broke through Chinese lines and inflicted devastating casualties on the enemy during the bitter cold Chosin Reservoir campaign of the Korean War. Leathernecks also distinguished themselves by fighting house to house in Hue City, Vietnam, and crushing the insurgency in Fallujah, Iraq.

The corps' commitment to its own glorious history is remarkable, inspiring present and future generations of Marines. No Marine graduates boot camp without knowing about the battle for Tarawa, an island that was so heavily fortified during World War II that the Japanese commander charged with defending it bragged that it would take a million men attacking for 100 years to take it. Marines took Tarawa in less than four days.

Likewise, every Marine puts on the uniform knowing that he or she must live up to the standards set by Marine Corps giants like Lt. Gen. Chesty Puller (five Navy Crosses), Gunnery Sgt. John Basilone (Medal of Honor, Navy Cross) and Sgt. Maj. Dan Daly (two Medals of Honor). This creates an environment where every Marine wants to overachieve, perpetually propelling the corps to new heights.

The Marine Corps' legacy is even enhanced by its political incorrectness. Marines do what is best for country and corps, and care not what the elites in government, academia or the press think about their old-school ways. For example, the Marine Corps is the only branch that trains men and women separately. Single-gender training is anachronistic to some, but it's hard to argue with the Marine Corps' success.

Finally, no organization has more zealous alumni than the Marines. A few good men have established more than 600 national Marine Corps organizations with thousands of local chapters. The largest such group, the Marine Corps League, has more than 900 community-based detachments throughout the U.S.

Enhancing the impact that Marine Corps alumni have on its storied reputation, many former Marines have made huge impacts on the world. The first American to orbit the Earth and the last ballplayer to bat .400, John Glenn and Ted Williams respectively, were proud Marines who served together. Fredrick Smith, who founded Federal Express, and former Secretary of State and White House chief of staff James Baker also claimed the title Marine. Even radio legend Don Imus speaks proudly of his Marine Corps service.

Because of this rich heritage, the Marine Corps' entire recruiting philosophy is essentially this: We pay less and take more casualties. Despite the seemingly uninviting pitch, new recruits keep pouring in. Even a few years back, when the other branches struggled mightily to fill their ranks as the Iraq war declined in popularity, the Marine Corps routinely exceeded its goals.

President Ronald Reagan summed up perfectly why America loves the Marine Corps when he said, "Some people spend an entire lifetime wondering if they made a difference in the world. But, the Marines don't have that problem."
Semper fidelis!