Complete humility in the face of complete injustice 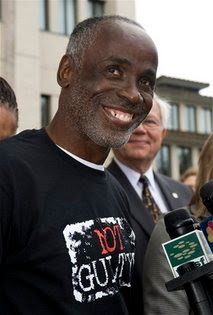 Mr. James Bain was set free in Florida this week after having served 35 years in prison for the rape and murder of a (9) year old boy that he didn't commit. DNA evidence not available at the time of trial, in the hands of the Innocence Project, was enough to finally set him free.

Mr. Bain's lack of contempt for the justice system is almost puzzling. His humble desires upon his release are almost difficult to grasp in context. Good food - a soft drink - time with his family.

I was struck by a number of things. First, Bain's release serves as a stark reminder as to the limits of the most developed system of jurisprudence that has ever existed. The innocent do sometimes get sent to prison. And the fact of the matter is that if innocents do get sent to prison - they also probably get put to death. Deep ethical question arise from the ignored ashes of this ever smoldering quandary. Given the proven infallibility of eye witness testimony and the like, should we require DNA evidence in all cases such as Bain's? Cases where the life of the Defendant can be taken by execution or imprisonment for decades? At what cost do we accept this type of justice in the aggregate. Many will simply respond that "most" cases are unlike Bain's. But it seems that we thus descend onto the terribly slippery slope of relativism. As long as "most" of the criminals are not being sent away wrongly, then it’s OK. Great! So long as you are not in Mr. Bain's shoes.

But perhaps more importantly, stories such as Bain's (and that of Nelson Mandela - who also served a lengthy illegal and immoral prison sentence) serve to teach us lessons outside the mere context of judicial limitations. Bain's freedom, even in his incarceration, stemmed from the renewing of his mind. He maintained an incredibly humble posture before the divine. There is little else that can help us understand his ability to walk away from such injustice with a smile on his face.

Bain, and others like him, serve as demonstrations of complete humility even in the face of complete injustice. Complete humility is often difficult to exhibit even in the face of justice. And I fail at it quite frequently. In my indignation at perceived affronts, there is often little thought of my small place in this universe and the humility with which all of my actions ought to be framed. We have become a world of narcissists and dangerous relativists - convinced of our own ill conceived moral superiority.