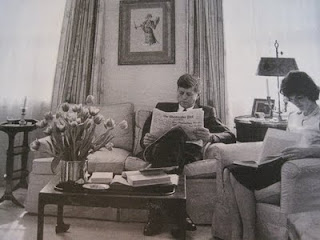 In the past, I often felt compelled to read certain books, even when they were not interesting to me. It is a strange self imposed torture, perhaps an offering to the altar of self discipline.

I don't do it so much these days. I have come to something of an understanding that it is simply fine to read what interests me at the moment. And while an educational foundation in certain pieces of classical literature is perhaps important, if for nothing more than establishing a canvas upon which other reading will be painted, the reading gods - if they exist, are perfectly happy as long as you are reading something. And thus, like many others, there is usually a collection of varied books on my nightstand in different stages of consumption. Presently, the Bible, Nietzsche, a collection of essays by Twain, a collection of Jefferson's letters, a book of puzzles, Steinbeck's Red Pony (just finished, only because it is an easy 100 pages), and a few others. I have reached contentment in being something of a disorganized, but happy reader. I have also come to be comfortable with buying a book, with full knowledge that I may not read it for several years.

I recently picked up one of the books that I found in a Lubbock, Texas bookstore several years ago. It is a Sotheby's auction guide to the Jacqueline Kennedy-Onassis estate sale in 1996. It is fascinating. Like many others, I am drawn to anything Kennedy with a sense of intrigue and morbid curiosity. As I looked through the Sotheby's guide, I came across a photo of JFK and Jackie sitting in their Georgetown living room. It is evocative, like something out of a black and white Ralph Lauren ad. He is reading the Washington Post and she has her legs neatly positioned, book in hand. The living room is perfectly appointed and elegant beyond repose. Fresh flowers articulately positioned in a vase. Everything in perfect order. Even the black and white hues of the photo are intentional, as to hide any of the disorderliness that color itself might create.

How dubious. I wonder what was really on their minds. Was he contemplating his next extramarital indiscretion? Was she thinking about whether she really wanted to be married to power, or perhaps something genuine? I have often wondered if the calm that she demonstrated after the President's assassination, which has been such an integral part of her legacy, was at least in part the result of some kind of unspeakable relief. So often the images that we portray are faux. We work hard to keep up projections of success, order, and calm. While all the often many of us suffer from ongoing tumultuous internal hurricanes which are more frequently than not misunderstood and unaddressed. Facing the hurricane and looking into it allows us to better appreciate our own destructive capability, potential, and beauty. And perhaps facing the storm allows us some semblance of a chance of seeing the sun finally come out.

I suspect that neither JFK nor Jackie ever really faced their storms. I think they knew the storms were there, but distant, like rarely visited relatives. Were they deeply unsettled? Were his indiscretions a way to escape? Was her acceptance of his philandering something other than duty bound - perhaps a deeply ingrained programming to be properly socially placed?

Like Biblical David - JFK's indiscretion was begot at the cost of many horrible things which were brought to bear upon his family, despite his appointed time with history. What was really going on behind this picture of a rising couple? I see little more than self deception. I suppose there might have been a quiet, perhaps unrecognized desire to break out. A yearning for calm which was misled by a search for power and place. I didn't see it at first. Just look past the fresh cut flowers.
Email Post
Labels: Kennedy